This page has some formatting and/or grammatical issues and could be cleaned up to improve readability. Consider improving it. Check the discussion page to see comments about the work requested.

This page contains 1 or more empty sections and needs improvement! Please consider adding to it. Check the discussion page to see comments about the work requested.

This page contains 1 or more sections that lack detail and need improvement! Please consider adding to it. Check the discussion page to see comments about the work requested.

This case study addresses the issues of cost-benefit sharing between Water Source Area (WSA) and Water Receiving Area (WRA) in a large-scale water transfer project in China. The proposed water quality control projects in the WSA of China’s South-to-North Water Transfer Project (SNWTP) Middle Route Project (MRP) affect industrial and agricultural sectors in the WSA. The water quality control projects primarily benefit communities in the WRA through improved water quality and decreased treatment costs, although the WSA also receives some benefits including water quality and ecosystem improvements. The water quality control projects have both direct and indirect costs which are primarily borne by the WSA communities. The WRA is more economically developed and have a higher per capita GDP than the WSA and watershed protection requirements will restrict development options in the WSA which adds to concerns of equity in the division of project costs and benefits. Payment for Ecosystem Services (PES) has been proposed as a compensation mechanism to redistribute the expenses of water quality services among the stakeholders in an equitable and effective manner. The Chinese Ministry of Finance has authorized transfer payments to the source area for ecosystem services. While PES has been used previously in China, criteria for quantifying compensation is poorly defined and some argue that authorized payments are insufficient. This case focuses on PES as a compensation mechanism and explores methods to quantify fair compensation.

The idea of transferring water from the South the North first arose in the early 1950’s. The late Chairman Mao suggested “borrowing” water from the South to meet the demands of the North [6]. The concept was ambitious. The scheme involved transferring water over 1,000 km which would require a huge investment in capital and require overcoming significant engineering challenges [6]. Over the next several decades, scientists and engineers debated the technical and economic feasibility of Mao’s vision. Engineering studies of the proposed transfer began in the 1950’s at which time three alignments were described: the Eastern Route, the Middle Route, and the Western Route (Figure 1)[7]. The Eastern Route diverts water from the Yangtze approximately 100 km below Nanjing and transfers it North to Tianjin; the Middle Route extracts water from the Danjiangkou Reservoir (Figure 2) on the Han River, a tributary to the Yangtze and diverts it to Beijing; the Western Route diverts water from the upper Yangtze tributaries to the arid Northwestern region [7].

In 2002, the South-to-North Water Division Project (SNWDP) was approved and construction began on the Eastern Route [8]. Construction has since begun on the Middle Route but has not yet begun on the Western Route. The government plans to complete construction of the Eastern and Middle Routes by 2013 and 2014 respectively [9]. As the construction of the projects proceeds, one question arises: what will the water quality of water delivered to the north be? According to the plans, water in the Danjiangkou Reservoir, the water source for the Middle Route, should exceed the Chinese Surface Water Standard for class II water [10]. Poor water quality would increase treatment cost. Water quality can be improved and controlled through watershed protection measures in the South; however, this has both direct and indirect costs for communities in the South [10]. The majority of the focus on water quality has been on the Middle Route which when complete will be the largest water transfer in the world; within the Middle Route watershed, Shiyan City has been the focus of watershed protection schemes because it is the largest city located in the Danjiangkou Reservoir source protection area and has the longest reservoir shoreline [11]. Planned watershed protection actions require capital investments and restrict development options for Shiyan City and the surrounding area. For this reason, the receiving area, the North, is expected to compensate the source area for their conservation efforts. Payment for Ecosystem Services (PES) has been implemented in China before but criteria for fair compensation is not clear [11]. This case study will focus on the water quality control in Middle Route source area and the use of PES to compensate the source area residents for their direct and indirect costs.

To understand the political framework of the topic of interest, we need to first take a look at the political framework of Chinese government system, as shown in Figure 3. The top administrative organization is called the State Council, followed hierarchically by provinces and Municipalities, cities, counties or districts, and villages. There are also Autonomous Regions (e.g. Xinjiang and Tibet), as well as Special Administrative Regions (e.g. Hongkong and Macau), which are at the same level as provinces. Ministries, such as Ministry of Environmental Protection, Ministry of Finance, and Ministry of Water Resources, etc., are executive bodies under the direct lead of the State Council. Departments of similar functions (environmental protection, water resources, etc.) take responsibility at the provincial, city, and even district level; they report to their superior organizations up to ministry level. 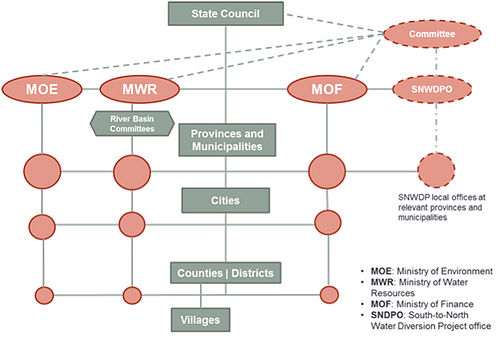 As an inter-basin water transfer project, SNWDP involves a number of provinces and municipalities. To coordinate among different provinces, an institutional body – the South-to-North Water Diversion Project Office (SNWD Project Office) was created in 1979 to oversee the planning, design, construction and operation of the SNWDP. A committee led by the Vice Prime Minister sets the goals and policy of the Project Office. The board members of the committee include all relevant ministers, provincial governors, and municipality mayors. There are also sub-offices at the provincial and municipal levels in charge of the construction projects within their jurisdictional boundaries. In short, the central government endorses SNWD Project Office to perform a coordinative role in all issues related to the South-to-North Water Diversion Project.

To assure good water quality the SNWTP Project Office created the Reservoir, the Water Pollution Control & Soil and Water Conservation Plan (hereafter referred to as “the Plan”) in 2005. According to the Plan, the water quality of the Danjiangkou Reservoir and main Han River should achieve or exceed Category II, and the tributaries flowing into Danjiangkou Reservoir should achieve or exceed Category III [10]. Eighteen control zones were created at the watershed of the reservoir. These control zones span across Shaanxi, Hubei and Henan Provinces. Three of the eighteen zones are within 5km of the Reservoir peripheral and are therefore defined as the Water Source Area Security Zone. Three zones on the far left side are the sources of Han River[12] . The soil and water conservation in these zones are essential to the water quality in the Reservoir, so together these zones are defined as the Ecological Conservation Zone. The other eleven zones in between are collectively called the Water Quality Impact Zone. The Plan computed the environmental capacity of each control zone, based on the water quality condition of the river stretch in that particular zone. By comparing the current pollution loadings with the environmental capacity of the control zones, the Plan computed the amount of loading reduction needed for each control zone [12].

Government expenditure on water quality related infrastructure projects. How will the required water quality standard be met in an equitable way?

The cost to finance this project both in terms of short term construction and long term maintenance is very large. The economic reality for the counties in the water source country varies significantly and in some locations the tax revenue is not sufficient to cover infrastructure project costs associated with the Plan.

Certain farmers will be required to cease farming their land upstream from the reservoir to preserve water quality (mitigation of runoff). A rough estimation is in the hundreds of thousands. Manufacturing plants in the area will also be displaced.

Costs and benefits sharing between WRA and WSA

Due to forced ecological migration of farmers and the shut-down of factories in the Water Source Area, the WSA will be bearing the greatest social and economic burden of the Plan. The Water Receiving Area will enjoy the benefit of water delivery, without the burdens borne by the WSA.

Individuals may add their own Analysis, Synthesis, and Insight (ASI) to a case. ASI sections are protected, so that each person who creates a section retains authorship and control of their own content. You may add your own ASI contribution from the case study edit tab.

Alternative Solutions to the Water Demand of Northern China

Concerning the ultimate problem of imbalance water demand distribution in the Northern and Southern China, scholars suggest implementations that will further consider China's water sustainability other than water diversion.

Payment for Ecosystem Services (PES), a voluntary exchange of a defined environmental service for a fee, has been previously implemented in China there is no consensus on criteria for fair compensation. Planned water quality control actions require capital investments and restrict development options for the water source area. For this reason, the receiving area is expected to compensate the source area for their conservation efforts. How should PES payments be determined?

Urban Water Systems and Water Treatment: How can costs for water quality projects be distributed between polluters and beneficiaries?

A Payment for Water Quality Services (PWQS) scheme could provide a method for investigating ways that the Water Source Area and Water Receiving Area might share the costs associated with the project.