The Chao Phraya River Basin (“the basin”) is the largest river basin of the Kingdom of Thailand and plays a significant role in terms of agricultural, industrial and economic development. In recent years, there has been a series of extreme drought and flooding that increasingly challenge the management of the entire basin. For example, the major flood in 2011 has set a new precedent in terms of scale and scope of the issues at hand. As a consequence, one should wonder if and how the current assumptions and implications underlying the current practice should be reassessed. Considering the Water Diplomacy Framework, the management of the basin could be assessed and improved in a number of following ways.

As a consequence, the policy and politics of the Chao Phraya River Basin management should operate on a nonpartisan, impartial and fact-based platform. The management should also consider the dynamics and limited predictability of the resources, diverse interests of people and the communities, and the interdependence of economic, societal, policy and political dimensions of the commitments and consequences from prior and current decisions.

Structure of the first publication[1]

The discussion comprises nine sections. The case first discusses the importance of the basin and implications in natural/environmental, policy and political terms. A brief description of the basin history and stakeholders renders a discussion basis of the integrated management and challenges in two senses: a conventional view encompassing seasonal challenges such as drought and flood control and an emerging view with extreme conditions since 2011. Focusing on the latter circumstance, the depth of the discussion is extended to emerging challenges as a consequence of the increasing extremity likelihood. Resolutions in response consist of a a proposal of a Master Plan on Sustainable Water Resource Management and a complementary analysis in the sense of the Water Diplomacy Framework.

The Chao Phraya River, together with the Mekong River, is the most important river in Thailand, as the entire river stretches across a significant amount of area: from the upper basin via its tributaries in the northern part of Thailand, to the middle basin where the confluence of Ping and Nan Rivers, the two major tributaries, is located, and flows southward to the delta into the Gulf of Thailand. The entire area is denoted as the Chao Phraya River Basin (See Exhibit 1).

Evolution of the Basin Significance 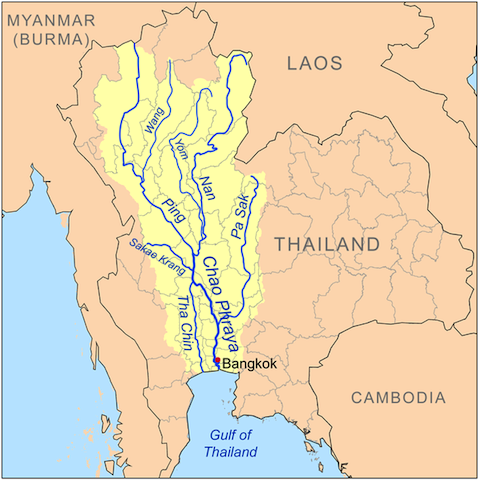 Exhibit 1: The Chao Phraya River and its Tributaries[3]

The Chao Phraya River, together with the Mekong River, is the most important river in Thailand, as the entire river stretches across a significant amount of area: from the upper basin via its tributaries in the northern part of Thailand, to the middle basin where the confluence of Ping and Nan Rivers, the two major tributaries, is located, and flows southward to the delta into the Gulf of Thailand. The entire area is denoted as the Chao Phraya River Basin.

The Chao Phraya River Basin is rich in the history of Thailand, dating back to the Sukhothai (700 years ago), Ayutthaya (500 years ago) and Thonburi (250 years ago) Kingdoms. Cultural, social and political developments of Thailand over the years have transformed the basin, and the basin inherited significant endowments in terms of population settlements; the basin also preserved the traditional and cultural heritage that are still present in Thailand and the Thai culture today.

Nowadays, the basin is home to approximately 40% of the country’s population, with farmers as the majority in the upcountry and urban dwellers in Bangkok and other big cities in the basin such as Chiang Mai, Ayutthaya and Nonthaburi. With significant agricultural development since the middle of last century, water irrigation and related infrastructure developments such as dams and reservoirs have been constructed to increase the scale, scope and efficiency particularly to develop all-year agricultural activities. The rationale is: with preserved water supply by the dams, additional water-intensive agriculture can be developed in the dry season, rendering a positive impact in the sense of economic, trade and labor policies.

Together with the growing demand for electricity, driven by economic advances, large dams were constructed to serve both agricultural and hydropower generative ends. In particular, the Bhumibol dam (749 MW) on the Ping River and the Sirikit dam (500 MW) on the Nan River together control over one-fifth of the basin annual runoffs combined. Control of these dams therefore plays a major role in regulating water supply in the middle basin and the delta area.

In addition, it is also intended that the dams would assume additional functions, such as management of saline incursion, especially during the dry season when there is salt water intrusion from the Gulf of Thailand to the agricultural areas in the delta and middle basin; flood mitigation by limiting runoffs from the dams during the monsoons; and preservation of natural ecosystem in the upstream reservoirs and promotion of tourism.

The Chao Phraya River Basin is the largest river basin of the Kingdom of Thailand. Since it has no transnational boundaries, the Government of Thailand assumes a primary authority of the basin management. From Thailand’s perspective, the basin not only represents a substantial geographical area inhabited by approximately 40% of the country’s population, it is arguably the most important river basin at least in five terms:

Traditionally, the planning and execution of water resources management in the basin and throughout the Kingdom of Thailand is the duty and responsibility of the Royal Irrigation Department (See Exhibit 2)[4]:

However, since the turn of the century, the basin confronts a critical situation to preserve the sustainability of the basin, in terms of: matching the growing aggregate demand from the agricultural, industrial and urban uses with the limited supply; and managing the increasing predictability of seasonal precipitation, impacting particularly rain distribution and variation, in every single year and between consecutive years. This situation threatens not only the region, but also the entire country, because of the basin’s contribution relative to the nationwide level in terms of economic output from the agricultural and industrial to the service sectors; sources of employment, and implication of cultural heritages and communities; and urban area growth. 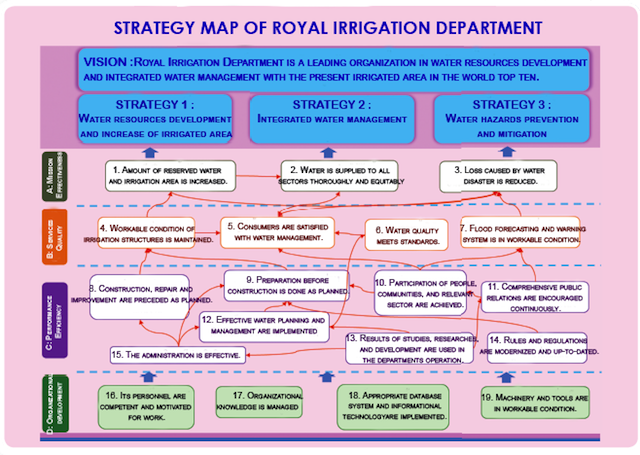 The Chao Phraya Basin has experienced a higher frequency of extreme conditions (droughts and floods) within the last few decades. Presumable causes are deforestation, decreasing precipitation from climate change and increasing water abstraction especially in the upper basin[6]. Such occurrences cause a heightened stress in the basin, despite major engineering constructions that are designed primarily to mitigate droughts, e.g.:

On the other hand, the basin is vulnerable to great flooding risks, especially in the middle basin and the delta areas including Bangkok. With this concern, His Majesty King Bhumibol Adulyadej initiates and patronizes Bangkok’s integrated flood management system[7] by heightening flood barriers in the Bangkok Metropolitan Area (responsible by BMA), improving river and drainage systems (by RID and PWD, respectively), building multipurpose dams (also by RID), and constructing temporary water storing areas[8] on the western and eastern coast of Chao Phraya estuary (by BMA and RID).

Every year, one of the most important strategic decisions[9] focuses on the total amount of water that should be released by the dams during the 6-month dry season[10]. In general terms, the decisions are based on four criteria:

In theory, the logic is to match the supplies in (2) and (3) with demands as specified in (1), by making sure the regulated levels of the dams do not deplete or overflow, specifically: The former concern of depletion raises the concern to ensure the dams will maintain adequate water supply, especially in an extremely dry year, until the end of the dry season, without breaching the minimum dam-level; whereas the latter concern of overflow prevention ensures that the dam will possess an adequate capacity to restore rainfall in the subsequent monsoon season, especially in an extremely rainy year, without breaching the maximum dam-levels.

However, this logic tends to be intractably complicated and as a result becomes a subject of mismanagement dispute from inadequate water supply (among RID, EGAT and PWA) or flooding (among RID, EGAT, PMA as well as BMA and MWA) that strongly affects the Bangkok Metropolitan Area. At the policy and political level, the Government of Thailand has become the focal point of dispute in the media, since it maintains an overall executive responsibility of the basin management.

In fact, potential causes of such practical challenges are varied and are not necessarily attributable to mismanagement of any one single party. The following are outstanding reasons of the management complexity on the basis of limited predictability with precision of: 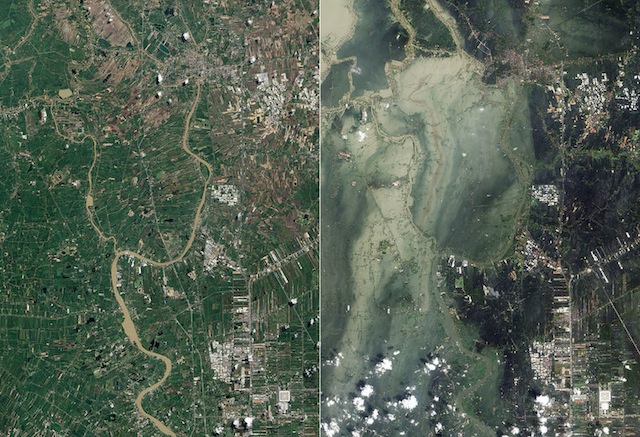 Exhibit 3: Satellite photographs showing flooding in Ayutthaya and Pathum Thani Provinces in July 2011 (left, before the flooding) and October 2011 (right, after the flooding)[11]

The severe flooding in 2011[12] portrays an illustrative example. The incident started with an early monsoon season, where extreme rainfalls from March over the northern basin area reached 344% above mean[13] and caused significant runoffs from the upper basin to Bangkok. By the beginning of October, most major dams in the basin were already near or at the maximum capacity. As reported in the Nation daily newspaper from October 2, 2011[14]:Nine major dams are over 90 per cent "full", including Sirikit Dam in Uttaradit (99 per cent) and Bhumibol Dam in Tak (93 per cent).

As a result, engineers of the major dams were left with no choice but forced to increase the rates of discharges. From this moment, flooding in the basin was inevitable. Exhibit 3 shows a comparison of an example satellite photos before and after the flooding.

The incident affected 13.6 million people and 65 provinces and, as a result, damages amounted to 1.4 trillion Baht in total[15]. This extreme situation questions the long-standing challenges of the basin, particularly in terms of integrated management and natural limitation of the basin to handle emergency situation, as well as overlapping interests among institutions and the politics thereof. From an analysis of the timeline in this incident, one could infer the causes of the dispute from the following three examples:

In the aftermath of this severe flood in 2011, the Government of Thailand established the Strategic Committee for Water Resource Management and, as a response to the crisis, proposed Master Plan on Sustainable Water Resource Management[19], under the management of the National Economic and Social Development Board, a long-term strategic planning authority of the administration.

The overarching rationale of the Master Plan is to embrace the country’s development initiative under the guiding principle of His Majesty the King’s philosophy of Sufficiency Economy[20], while incorporating short-term action plans to (a) improve the capacity of flood prevention, emergency flood management and warning systems; (b) prevent and minimize losses and damages from the large-scale floods; and (c) build confidence and engage farmers and communities.

The action plans comprises 8 work streams involving over 20 different state organizations with a total budget of 300 billion Baht (i.e. approximately 2.6% of the national GDP in 2012). The lion’s share of the budget shall be allocated to:

As of 2013, it is still unclear how the government would finance this project; whether, when and to which extent this Master Plan will be implemented; and if the intended outcome could possibly be created at the targeted scale and scope, and sustained over the long haul.

Individuals may add their own Analysis, Synthesis, and Insight (ASI) to a case. ASI sub-articles are protected, so that each contributor retains authorship and control of their own content. Edit the case to add your own ASI.

Discussion: Ongoing Challenges After the Major Flooding in 2011

As a result, the basin needs to cope with additional dimensions of the challenges: