There are no reviewed versions of this page, so it may not have been checked for adherence to standards.
Jump to: navigation, search
{{#var: location map}}

The Narmada River is the fifth longest river in the Indian subcontinent, and one of the five holy rivers of India. Plans to develop the river for irrigation and hydropower have been discussed for over a century. It was only after India’s independence from Great Britain in 1947 that plans began to take shape, thanks to Prime Minister Jawaharlal Nehru’s aggressive development agenda. Flowing 1,312 kilometers through three states in Central and Western India, Gujarat, Maharastrha, and Madhya Pradesh, the Narmada basin now boasts over 3000 dams, a “giant staircase of reservoirs.” The largest of these dams, the Sardar Sarovar, also boasts of causing a protracted conflict starting shortly after Indian independence and continuing through the present day, involving countless government agencies, decades of negotiations between four states, one of the largest people’s mobilizations in India’s history, pressure from international environmental organizations and governments, the World Bank, multiple supreme court cases, and tens (or by some counts, hundreds) of thousands of people displaced. As of May 2014, the construction of the dam is still not complete, so this list of actors could potentially grow.

The conflict began as an interstate issue over the right of the state of Gujarat to raise the height of a dam on its portion of the Narmada River, creating a submergence area that would impact plans for hydropower development in co-riparian states Madhya Pradesh and Maharashtra. The central government of India intervened, establishing the Narmada Water Disputes Tribunal, which allocated shares of water and power from the dam between the three states and an extremely arid non-riparian state, Rajasthan, according to estimates of river flows and hydropower potential based on its own study. The Tribunal’s award also established minimum requirements for rehabilitation and resettlement of “Project-Affected Persons,” based on its study’s estimates of the dam’s submergence area and the number of land-owning families living in those areas. This initial, binding decision was made by a three-judge panel, and did not involve participation by representatives of the four states involved, nor did it include any efforts to consult with communities whose villages would be submerged, over half of which were Adivasis (indigenous Indians) who are subject to special protections in the Indian constitution.

In the mid 1980s, when the World Bank agreed to finance the project before an environmental impact assessment was conducted, communities scheduled to be submerged by the dam construction organized themselves into the Narmada Bachao Andolan (NBA), a coalition of farmers, Adivasis, and activists. The NBA successfully mobilized the interest of international environmental organizations, which prompted the World Bank to conduct an independent review of the project and eventually withdraw based on issues surrounding environmental impacts and inadequate resettlement and rehabilitation. The project has continued to this day, financed by the Indian central government and individual states, and the NBA continues to be active in national politics and advocate for just compensation.

Map 1. Location of the Narmada Basin 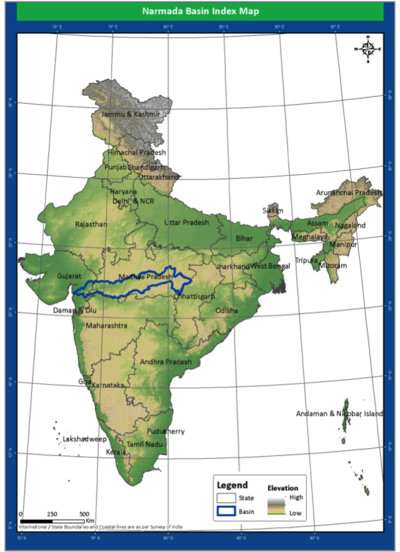 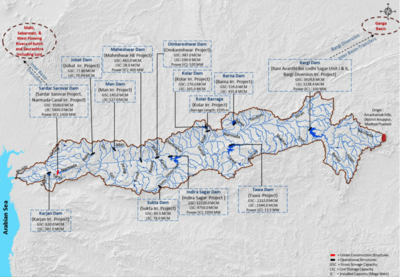 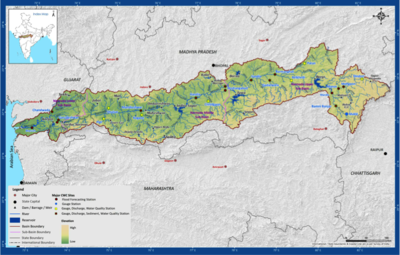 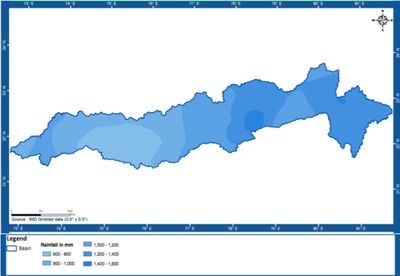 The trajectory of the development of the Narmada Basin has its roots in rhetoric and legal frameworks established in the immediate period after India’s independence from Great Britain. India’s first Prime Minister Jawaharlal Nehru’s aggressive development agenda of modernization equated dam building with nation building, and was famously quoted as referring to dams as “the temples of modern India.” Traditional, small-scale irrigation systems were destroyed in favor of massive projects, over 3000 of which have been constructed in the 60+ years since independence.

The legal foundations of the development plans of the Narmada are based on a 1956 constitutional amendment, the Interstate River Water Disputes Act (IRWD). Anticipating interstate water disputes because of frequently changing state borders in the post-independence period, the law elaborates a dispute resolution process, involving forming a tribunal comprised of judges appointed by the Chief Justice of the Supreme Court. The bifurcation of Bombay state along linguistic lines into the states of Gujarat and Maharashtra—whose new borders were separated by the Narmada River—at the same time that Gujarat began planning major projects in the Narmada Basin, initiative just this sort of conflict when the states of Maharashtra and Madhya Pradesh realized that Gujarat’s plans for the Sardar Sarovar dam would submerge areas in which those two states were planning to develop hydropower projects. After failed negotiations between the states, the central government intervened and formed the Narmada Water Disputes Tribunal (NWDT), according to the IRWD. The allocations of water and shares of power determined by the award in 1979 (see Table 2), based on estimates of river flows by the Tribunal, are legally binding. Partial shares of the water are given to an extremely arid non-riparian state, Rajasthan. The Tribunal also establishes the Narmada Control Authority, with representatives of each state to manage the requirements of the Tribunal’s award.

Several environmental protection efforts followed the Tribunal’s award, including a law requiring environmental impact assessments of medium and major irrigation projects, including dams. The Ministry of Environment and Forests is also created at this time, which initiated an environmental impact assessment after the World Bank approved a $450 million loan to India to construct the Sardar Sarovar dam. Despite going against both India’s and the World Bank’s own policies regarding measuring environmental and social impacts of projects of this kind, dam construction begins in 1987.

Cases involving disputes over the Sardar Sarovar have been heard twice by the Supreme Court, the first of which was brought in 1995 by the Narmada Bachao Andolan, a coalition of protest movements made up of communities who would be impacted by the submergence areas of the dam’s reservoir. On the grounds that the dam was approved without proper consideration for environmental impacts and inadequate resettlement and rehabilitation, the Supreme Court suspends construction. As a result, the governments of Gujarat, Madhya Pradesh, and Maharashtra set up a Grievance Redressal Authority. The second Supreme Court case in 2000 gives permission to Gujarat to raise the height of the dam, requiring approval by the Narmada Control Authority in 5-meter increments, and addressing environmental and resettlement concerns incrementally.

Water and Power Allocations of the Sardar Sarovar Project according to Narmada Water Disputes Tribunal Award, 1979

Government Estimates of Benefits and Impacts of the Sardar Sarovar Project

The Narmada River has enormous religious significance in Hinduism. The river’s origin on the Amarkantak plateau in Madhya Pradesh is considered to be a doorway to nirvana, and many devotees make a pilgrimage circumambulating the river, making the 2,600-kilometer journey on foot. The aforementioned quote by Prime Minister Nehru equating dams with being the “modern temples” of India was not shared by the thousands of people displaced by the construction of the Sardar Sarovar dam, approximately 60% of whom were Adivasis whose lives and livelihoods revolved around the river and the forests surrounding it.

The formation of the Narmada Bachao Andolan (NBA), which came to vehemently oppose all dams and canals on the Narmada River, was not originally entirely against the dams. Initially, the movement sought to ensure that communities who would be displaced by their construction would be adequately and fairly compensated and resettled. Although the states had rehabilitation and resettlement policies on paper, the NBA observed that majority of people living in submergence areas were not informed or consulted, and would not receive any compensation because they did not have formal titles to their land, despite having lived on the land for countless generations. The implementation of these policies was also problematic, with no coordinated plan for how to adequately resettle approximately 200,000 people, the majority of whom have lived off the land all of their lives, were illiterate, and had virtually no contact with wage labor. Policies seen as positive, such as states promising land-for-land replacement for displaced families, were impossible to implement in practice because states did not have enough land available for all families affected.

The escalation of the NBA’s protest activities, including fasts, mass demonstrations, and dramatic neck-deep confrontations with police in partially-submerged villages, led to widespread attention from international environmental and human rights organizations. Pressure by these organizations on their home governments and subsequent media attention led to several international companies withdrawing from their investments in the project. Embarrassed by the negative coverage, the World Bank initiated an unprecedented independent review of its involvement in the Sardar Sarovar project. The independent review’s report recommended that the Bank “step back from the projects and consider them afresh” (See footnote 1 for the report’s core recommendations). The World Bank eventually pulled out of the project, and India decided to continue to finance the project on its own.

Major stakeholders in conflict over development in the Narmada River Basin

Stakeholder Categories and the Issues of Greatest Importance to Each Group

Individuals may add their own Analysis, Synthesis, and Insight (ASI) to a case. ASI sub-articles are protected, so that each contributor retains authorship and control of their own content. Edit the case to add your own ASI.