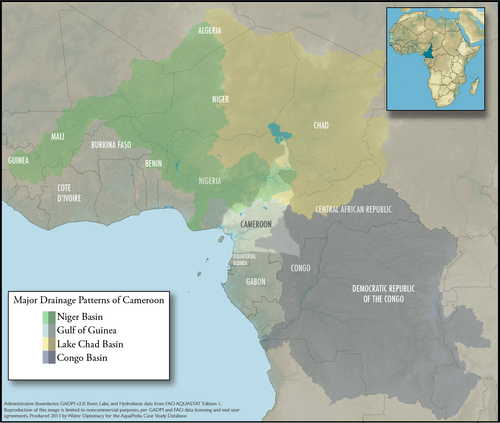 Cameroon's rivers drain to four major basins: the Niger, Lake Chad, Congo, and Gulf of Guinea (Atlantic). Major rivers include: The Sanaga, Nyong, Cross (Manyu), and Ntem Rivers(Atlantic drainage); the Benue River (Niger River); the Logone River (Chari / Lake Chad); the Dja and Boumba Rivers (Congo Basin). Because many of these rivers contribute to transboundary basins, management decisions at the local/regional/country level for water resources in Cameroon may have implications beyond its borders.

Cameroon can also be classified into 10 distinct ecological regions. The Sudano-Sahelian zones of the (1) Mandara mountains, (2) Plains in the Far North Province, and (3) Benue valley are characterized by shrubby steppes, short wet season characterized by 80-90cm of precipitation between July and October, and a network of seasonal and perennial rivers. Environmental challenges in these zones include desertification and soil-degredation. [1]

The savanna zone contains the (4) Adamawa highland savanna, (5) Tikar plain, (6) Highland plateaus (West/Northwest Provinces), and (7) Lowland savanna (East/Centre Provinces). These regions are dominated by both grassland and forest savanna and receive up to 300 cm of precipitation each year. Soil-degradation is a concern here, but the rate of degradation due to resource exploitation has been slower than in the Sudano-Sahelian zone.[1] The coastal and maritime zone of the (8) Maritime Coast (Gulf of Guinea) has a high population density and is the economic center of Cameroon with extensive industrial and agricultural development. The primary land cover include mangrove and tropical rain forest, but deforestation has significantly impacted coastal erosion. Environmental challenges in this region are associated with rapid urbanization, industrial polluters, over-fishing, and insufficient regulation to account for the impacts of port activities, industrialization, and agricultural development.[1]

The Tropical rainforest zone includes areas within (9) Centre and Littoral Provinces and (10) Southwest and East Provinces, accounting for more than 35% of Cameroons land. These areas experience four seasons of equatorial climate with 200 – 400 cm of precipitation each year. Exploitation of forest resources is an environmental concern in these areas. [1]

Rainfall in the Southern portion of Cameroon is greater than in the North. While the length of the dry/wet season may vary between the ecological regions, Cameroon does experience a distinct dry season between November and March. While the southern plateau may receive between 1 – 3 cm during a dry month, and Northern regions may not record any precipitation during a dry month.

There are extreme dry and wet periods and the great variability between years combined with the large variation in rainfall regimes across the country lead to a great potential for both flood and drought in Cameroon.

Deforestation for agricultural purposes has increased the seasonality of streams and altered groundwater recharge rates in the Bamenda highlands.[1] Cattle grazing in the Adamawa region has lead to reduced recharge and increased stream seasonality due to vegetation removal and soil compaction. Indiscriminate planting of water-intensive Eucalyptus in grassland catchment areas has reduced arable land and lowered local water tables. [2]

Reservoirs and Dams in Cameroon

Dams in Cameroon have been constructed for both water storage for irrigation and hydo-electric generation.