This page contains 1 or more empty sections and needs improvement! Please consider adding to it. Check the discussion page to see comments about the work requested.

This page could use the addition of additional references and citations. Consider improving it. Check the discussion page to see comments about the work requested.

The Kosi River (also referred to as the Koshi, or Sapta Koshi) is a major tributary of the Ganges that flows through Tibet, 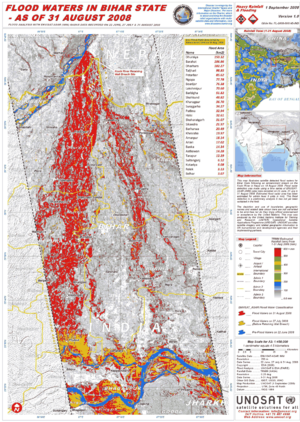 Nepal and India. The Kosi system was described as an inland delta built by the large sediment flux by Gole and Chitale (1966). The dynamic nature of the Kosi is most easily seen in its westward movement within the Indian State of Bihar – a shift of over 120 km in the past 250 years.

Following disastrous floods in the Kosi basin in 1954, India and Nepal began a National Flood Control Policy. The program included 3 major stages – the construction of a barrage in Nepal to harness the western migration of the river and allow for the development of hydropower and irrigation projects, the construction of eastern and western embankments above and below the barrage to reduce flood event frequency, and an additional dam (as yet unbuilt) at Barakshetra, Nepal to provide additional flood prevention and hydropower.

Because of the great instability and sedimentation rates of the Kosi, the embankment system requires regular monitoring and maintenance. Changes in river geomorphology due to scouring and deposition of transported sediment can affect the stability of embankment sections and spurs. The breach in 2008 occurred when two spurs collapsed over a 24-hour period, leading to a breach in the embankment between them. The failure occurred due to scouring of the spurs, not because of extreme precipitation. The flow on August 18, 2008 was less than 20% of the recorded maximum flow. [1]

Difficulties in expressing the actual need for repairs, communicating these needs through the appropriate chain of command and coordinating with multiple parties for access, materials, and construction resources to perform repairs were problematic in this case. For a detailed description, please see: Shrestha, R. K. et al. Institutional Dysfunction and challenges in flood control: a case study of the Kosi Flood 2008. Economic and Political Weekly. 45, 45 - 53 (Janaury 9 2010).

Due to different tabulation methods by local government, NGO, and other reports, it is difficult to provide a precise value on the extent of the damage in both India and Nepal. However, the lives lost due to flooding (in the hundreds) are small compared those lost to illness in the aftermath (thousands). The flood destroyed standing crops (primarily rice, other grains, jute and sugarcane) and washed away the nutrient rich topsoil and deposited tons of sand, rendering land largely infertile. Roads, water sources and other personal and public infrastructure was destroyed by floodwaters.

This breach occurred over a 24 hour period of time. Had there been an effective early warning service or system in place, there would have been time for households to prepare or evacuate and for government and NGOs to begin staging for recovery efforts [1]

Individuals may add their own Analysis, Synthesis, and Insight (ASI) to a case. ASI sections are protected, so that each person who creates a section retains authorship and control of their own content. You may add your own ASI contribution from the case study edit tab.

What kinds of water treaties or agreements between countries can provide sufficient structure and stability to ensure enforceability but also be flexible and adaptable given future uncertainties?

The breach site for the 2008 flood was in Nepal, and most of the flood impacts there occurred in the Sunsari districts, with about 60,000 people affected. However, a few kilometers downstream, in India, about 3.3 million people were affected in Bihar (Supaul, Saharsa, Madhepura, Araria and Purnia districts). Neither the 1954 or 1966 Kosi Project Agreements addressed the issue of economic responsibility for disasters due to project failure. While flooding had been common along the river prior to the agreements, no mechanism was included to address future flood concerns, disaster response capacity, or economic outcomes or responsibility in case of infrastructure failure.

Additionally, the shifting path of the Kosi and powerful scouring and sedimentation patterns along the river have proved to be a greater challenge than originally envisioned by the engineers who developed the project. The flood control structures have altered the flood regime, but without constant monitoring and maintenance, they are likely to fail again. While the project altered the original flood risks in the region, it has had unintended outcomes that include high maintenance costs and increased risk of catastrophic flood due to structural failures. The Project Agreements address the need to provide maintenance for the structures, but did not identify or address specific needs or provide a mechanism for strong enforcement of the responsibilities of either party.