Includes Riparians: Turkey; Iraq; Syria; Iran;
Facts about included riparians are at the end of the article.

The Tigris Basin catchment area in the Southeast of Turkey is one of the country’s 26 river basins[1] Turkey contains 20% of the basin. Syria, Iraq, and Iran lie within this basin, while only Syria and Iraq lie on the Tigris downstream of Turkey. Average annual basin discharge is 16,800 MCM at Cizre gauging station [note 1] (Girgin et. al., 1). While its land area in Turkey is rather small (56,614 km2), the Tigris Basin represents about 20% of the area entire basin. While the entire Tigris river is about 1850 km long, only about 400 km lie within Turkey itself , while the rest flows over the border between Syria and Turkey and then through Iraq, joining with the Euphrates river before draining into the Shatt al-Arab waterway. Iran, which also holds part of the basin, contributes tributaries to this waterway (FAO). 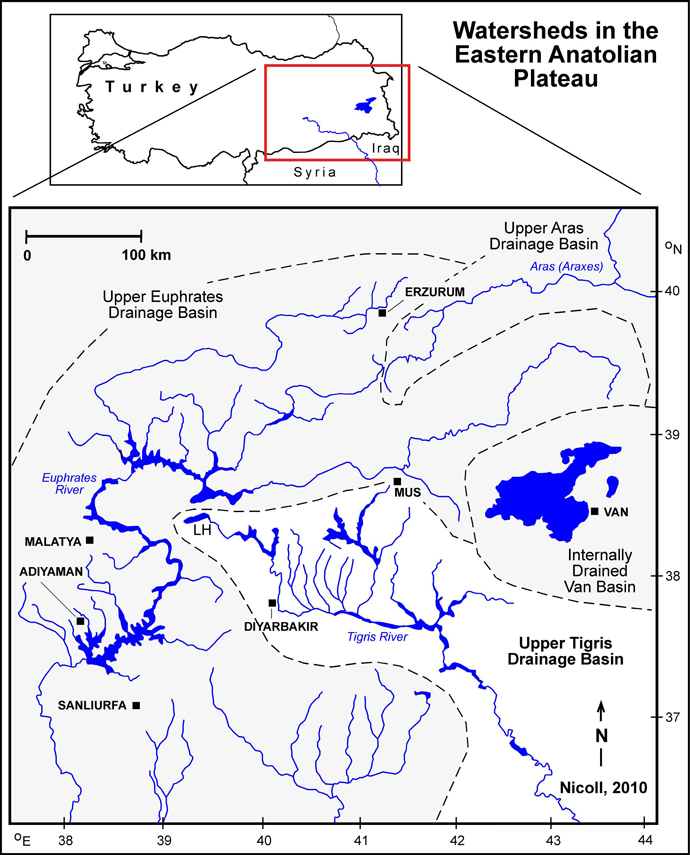 The Tigris River begins in the highlands of the Taurus mountains, where annual precipitation in the form of rain and snow often exceeds 1,000 mm [2]. Because most of the Tigris basin is semi-arid (Nicoll), snowmelt and precipitation provide a great deal of the river’s flow in the spring and summer. While most precipitation occurs between October and April [2], snowmelt and stream flow peak between March and May of each year (FAO), creating seasonal floods. Low water season is typically from July to December.

Turkey contributes a large amount of water to the Tigris basin; most of this is through the Tigris River itself, while some is through tributaries that drain into the river downstream in Iraq. It is estimated that Turkey generates about 32% of the Tigris River’s total stream flow as the river flows into Iraq. Taking into account the Greater Zab tributary, which flows from the Tigris basin in Turkey and joins the Tigris in Iraq, Turkey’s total contribution is estimated to be between 44% (Beaumont, 170) and 51% (FAO) of the river’s maximum flow. In terms of gross annual flow out of Turkey’s Tigris Basin, estimates include 21.3 km3 (Altinbilek, citing Akbulut et. al, 2009) and 28.1 km3 (FAO). The differences in these estimates are in part due to the large variability in yearly flows. (During the 1960s, annual flow of the Tigris River at the Turkish border varied between the extremes of 7,891 MCM and 34,340 MCM [3].

Southeastern Turkey is one of the most seismically active places in the world. The Tigris-Euphrates Basin in Turkey lies within two major fault zones: the North Anatolian and the East Anatolian zones, both of which have been known to produce large earthquakes. There have been over 344 earthquakes measured in the Tigris-Euphrates basin that surpass 4.0 on the Richter scale, including 2 in the 20th century that exceeded a 7.0. Dams in the region can be susceptible to structural damage by such seismic events. The Turkish Association for Dam Safety recently conducted a study of 42 dams in the Tigris-Euphrates Basin in Turkey and found 15 dams at “moderate” hazard for damage due to earthquakes, 3 with a “high” hazard rating, and two with an “extreme” hazard rating. [4] When discussing the potential effects of the building of large dams in the region, the danger for failure due to seismic activity must be taken into account.